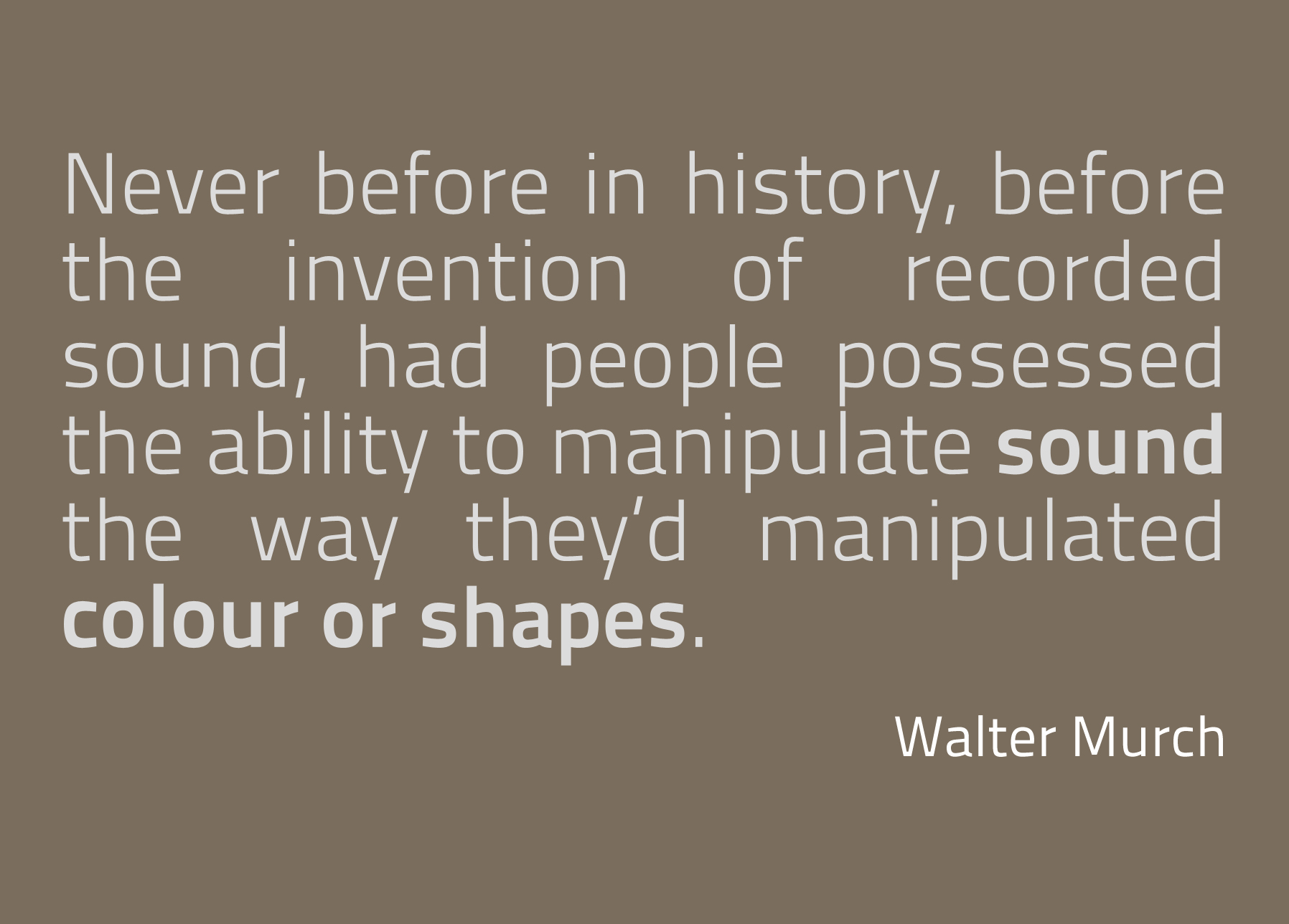 Quote extract from “Sound Doctrine: An Interview with Walter Murch“

Why what you hear is not what you get

When people ask me what I do, I tell them I work in sound. The most common response: “Oh, so music then? What do you play?”. It’s easy to understand why most people make the assumption. People don’t typically see sound as a separate entity. Sound isn’t seen as a concept that needs to be designed or produced or managed in any way. It doesn’t develop or evolve in the way CGI or multi-media live performance or Virtual Reality has. Surely, sound is just intrinsically linked to the visual performance. What you see is what you get, right?

There are plenty of sources I could pull behind-the-scenes clips from to illustrate how this is almost never the case. However, I felt this video on wildlife documentaries best argues this:

The Birth of Sound Design

You could be forgiven for misunderstanding the role of sound design. It hasn’t exactly been considered a household term since Walter Murch coined its first official film credit in 1979 for his work on Coppola’s Apocalypse Now. Up until then, the terms sound re-recordist or sound montage were deemed most appropriate for the emerging discipline. Music, a medium that dates back to the dawn of time, had already established itself successfully in the film landscape by this point.  We can trace experiments back to Edison’s early days of cinema. It seemed sound design as a technique wouldn’t make much headway until the term itself picked up momentum.

Our lack of awareness was not limited to the world of film alone. Up until recently, sound design was virtually unheard of as a term in the world of theatre. It wasn’t until 2004, a full 35 years after Murch’s first film credit, that the Laurence Oliver awards finally decided it justified it’s own category and gave the first prestigious award to the controversial Jerry Springer: The Opera.

Since then, we have seen the development of sound design as a medium in itself, rather than just a supporting platform. We have collectives such as the Sonic Arts Award; a challenge for artists worldwide to develop submissions in a range of different categories ranging from sound installations to experimental soundscapes. There are the G.A.N.G (Game Audio Network Guild) Awards, presented to those creating outstanding works in the field of videogames and interactive entertainment. There are Game Audio meetups here in the UK and tons of others worldwide, including a grassroots conference at the Game Developers Conference. Sound designers are represented amongst traditional mediums too with the inclusion of categories in the Oscars and the BAFTAs.

I am amazed at the new and intriguing ways people around the world embrace sound as an art form. New entrants who learn to create fresh and exciting work from it. I use this as inspiration to spread the word. In that way, I feel part of a global collective trying to evolve one of the most underrated art forms around.